In this section... In the beginning - The 80s - Jazz around the globe - Recent times - Jazz articles - Recordings

Recent and up and coming gigs: 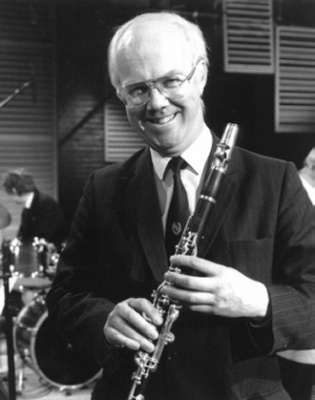 I grew up in Southport, Lancashire, in a home in which the bizarre but all too accepted working class barriers of culture operated. We had a few "pop" classics - Puccini arias, the Grieg piano concerto, and the like -  masses of Gilbert and Sullivan, Bing Crosby and Frank Sinatra, and, wonder of wonders, a lot of jazz. The jazz wasn't so much Louis Armstrong as "dixieland", with Muggsy Spanier's Ragtimers, the Venuti-Lang bands, plus the British derivatives, such as Freddy Gardner, Harry Parry and Joe Daniels rather than the classic jazz of King Oliver or the revivalism of Bunk Johnson. My father had spent much of the war in the RAMC in Belfast and, legend - his legend - had it that he had sat in on trumpet with Ken Smiley's band there. He did have one souvenir of that time: a private recording of a group led by a clarinettist, Sammy Kaminetsky, and in the centre of this disc someone had painstakingly drawn in ink an Esquire label! By the time I got interested in jazz he played some piano but basically only two tunes, "Whispering" and "Georgia on my mind"!

The late 1950's were the time of remarkable jazz popularity with records such as "Petite Fleur" in the hit parade. To a large extent jazz was the popular music of the day and a group of boys at the local grammar school became addicts, travelling to all night sessions, riverboat cruises, celebrity concerts and providing the mainstay of local jazz clubs. Eventually some of this group got fed up with just listening and decided to learn instruments and to form a band - as if the decision itself would create the actuality. So it was in 1958, at the age of 16, having just left school, that I bought a secondhand Boosey and Hawkes Regent clarinet, for, I think £16, through an advert in the Melody Maker newspaper.

I managed to afford ten lessons, which provided the rudiments of the fingering system, and we started a band, the Bienville Jazz Band - a name picked off a street map of New Orleans. One of the band's family were shortly due to move into a flat which was temporarily unoccupied and we rehearsed in an empty room there. Heaven knows what it must sounded like to the neighbours. We started without a trumpet player but soon one was introduced to us. Alas, I cannot remember his name but he was very posh and had an extremely expensive instrument. The problem was that he could only play one tune. Rather curiously this was "The Old Grey Mare She Ain't What She Used To Be". The poor nag was certainly in even poorer shape after regularly being done to death by us. 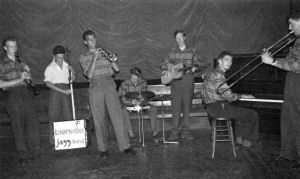 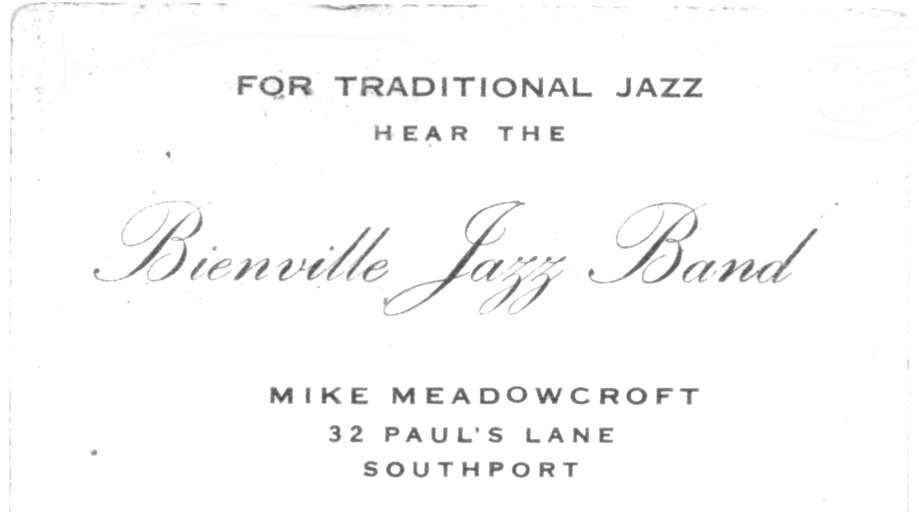 After a couple of weeks of the old grey mare, this trumpeter player announced that we had a booking. His father was holding a masonic function at their house in Hightown, between Southport and Liverpool, and we were booked to provide the music! It was painstakingly pointed out to him that even filial loyalty would wear thin after the first hour of the old grey mare, but, he said brightly, "it's six weeks off, and we can learn some new tunes by then." Not wishing to risk  a complete debacle we dragged in another more senior ex-school colleague on alto sax to provide emergency assistance. We bought tartan shirts as a band uniform and to my amazement all went well. From this initial experience came my awareness that, despite horrendous pre-gig nerves, all will go well. As a later bandleader said to me, "Just remember that no-one out there can get a note out of your instrument."

The colourful but limited chevaline trumpeter left rather sooner and a photograph from the period shows Barry Dixson on trumpet, Roy Watkins on piano, Dave Hood on guitar, Tich Partington on the tea chest bass - an instrumental phenomenon of the late '50s skiffle era - John Sheville on drums, and a particularly close friend of the period, Neil Freeman on trombone. Incidentally, Neil became one of the world's leading authority on the original Shakespeare texts, and a professor at the University of British Columbia.

The remnants of the band then joined with an older band, the Riverside Jazzmen, led by an ageing trombonist, Bill Bent, which was looking for new members to stay in business. This band played all around Merseyside and I enjoyed the regularl gigs until politics caused me to leave the north for London in January 1962 to work at Liberal Party headquarters. During my time with the Riverside band its trumpet player, being perennially hard up, offered to sell me a soprano saxophone for six pounds! I agreed to pay him £1.50 a month and I don't think I ever paid the last instalment! If you're out there, I'll happily pay you that last 75p! I still play the same splendid Italian wide bore instrument.

For a long time after that to keep going it was a question of sitting in, or depping with whatever bands I could find in London and Leeds, until in the 1980s the Liberator satirical revue began its perfomances at the annual Liberal Party Assembly. They needed a band to play before the perfomance started and also in the interval. Later on the band accompanied some of the numbers and the whole evening became much more integrated. This was the beginning of the Liberal Party's Granny Lee All Stars - a name I have often regretted and which came about simply because at the time, across the road from Big Ben, was Grandma Lee's café, on the first floor of which was - fatally - a piano. The owner readily acceded to a request from us to perform there regularly and we in effect became the house band. Many foreign tourists enjoyed the sessions there wholly unaware that the band was made up of MPs and sundry other assorted Liberals and fellow travellers. 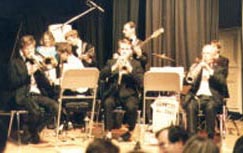 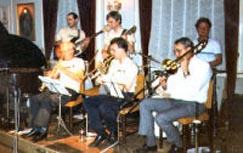 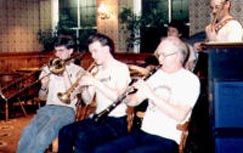 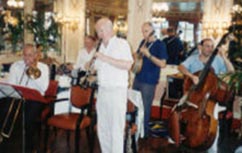 The gimmick of a politicians' band was quite intriguing, and probably covered up its shortcomings. It also led to it being booked for a number of PR promotions and charity occasions, including occasional, and short, radio and TV appearances. Memorably it played at the wedding of Peter Kellner and Cathy Ashton in St James' Church, Piccadilly. Inevitably its personnel was somewhat variable but, in addition to myself on clarinet and soprano sax, its core members were, and still sometimes are, Andrew Meadowcroft (trumpet), Tom Rippeth or Simon Merritt (trombone), Rob Gregg (piano), David Snashall (banjo), Michael Cole (bass) and Chris Serle (drums). Another parliamentary colleague, Archy Kirkwood played guitar in the band in the early days. 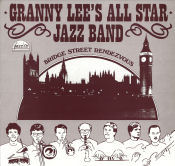 Thanks to the efforts of the late and much lamented Chris Winchilsea, and the generosity of Trevor Horn and Jill Sinclair in offering us their ZTT studios, the Granny Lee band recorded an album in 1985. After a full day in the recording studio, a weary band went on to play a somewhat anachronistic gig at Stringfellows club the same evening. The record failed to reach the top 20 - or even the bottom 20 - and copies are still available from me - now on CD! (see recordings) Rather embarrassingly, for a time I was often greeted at Liberal dinners at which I was the booked speaker by the said record playing in the background.

Other appearances at the time produced unexpected responses. One Easter weekend I was back in Leeds from Westminster and found two friends, Al Potts and John Pashley, busking in the Leeds city centre precinct. I stopped for a brief chat and Al asked whether I had my clarinet with me. It happened to be in the car and I was instructed to go and get it. We were happily playing away, with occasional passers by looking puzzled at the apparent appearance of a local MP busking, but then a young man approached Al and asked if he could give him a leaflet about animal rights. Al graciously accepted the leaflet, which was headed in bold letters "Ask your MP these questions". Al told the man that he would ask him immediately, and turned to me. The man got very cross, saying that this was about animal rights and was not a joke. Al insisted that he would "ask his MP these questions" there and then, and the man got very belligerent. I had to produce my parliamentary pass to convince him that he was not being made fun of.

On another occasion my son, Andrew, asked me to join him on a gig at the Spring Street Theatre in Hull, When I arrived he announced to me that it was a two-piece and that I was 50% of it! We were playing away very happily and eventually an older man in the audience came over between numbers and confided to me that "there's a bloke in Leeds in politics who's the spitting image of you"!

Jazz around the globe

The advantages of playing clarinet, as opposed to every other band instrument, is that it can be taken apart, wrapped carefully in a towel and packed in a suitcase. Consequently I've played with local bands on every major electoral mission over the past ten years, as well as at numerous venues on a trip across the USA in 1986. The electoral support mission to Malawi in 1994 was particularly enjoyable due to the existence of a great band of expats there. Twenty-four hours after my arrival in Lilongwe I had a 'phone call from a Danish EC consultant who asked whether it was true that I played jazz clarinet. I thought that it was far enough from the UK to compromise with the strict truth, so I said "yes". He then said "you've just been auditioned and you're playing tonight!" There was a palpable shortage of entertainment and this band was in great demand. We played three or four nights a week - and long sessions at that - at diplomatic functions, the little local jazz club, and on countries' national occasions. We had the German ambassador on trombone and no less than four singers, including Janet from the East End of London who sang the Bessie Smith repertoire excellently. In 1999, in Jakarta, I played every Sunday with the local Indonesian dixieland band, thus demonstrating the universality of this great music.

I continued to tuck my clarinet away in my suitcase on foreign missions and, more often than not, there was a group, or at least a pianist to perform with. In the Congo I played duets with Geert Diemer at the restaurant "Caf'' Con' " in Kinshasa in 2005 and in Benin in 2006 I played duets with Rob Baker at the Sheraton Hotel, Cotonou, from which we were later thrown out (for not having permission to play - which was quite true!

In France there was usually an opportunity to play with the band at the Faugères Fête du Vin each summer.

In the noughties the Granny Lee Jazz Band played regularly at the Leeds Club (now The Lost & Found) and recorded two albums there.

In recent years we have been regulars at the National Liberal Club's annual summer party and latterly, the Leeds jazz club. 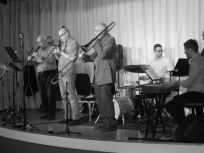 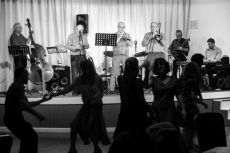